Justin Bieber decided to celebrate the release of his new album Justice and the title track Peaches with a brand new neck tattoo!

The 27-year-old Canadian singer shared a photo of him getting a brand new tattoo on his neck, to which his mother was very quick to comment "Don't you have enough yet?". She alsoadded an angry face emoji.

Justin's fans also pointed out a promise he made to his wife Hailey in the comments saying "no more neck tattoos", however, it looks like Hailey got herself a matching peach tattoo with Justin!

Looks like mama Bieber was not very happy with the new peach in on Justin's neck, but it's nice to know that even a 27-year-old superstar still gets scolded by his mother. 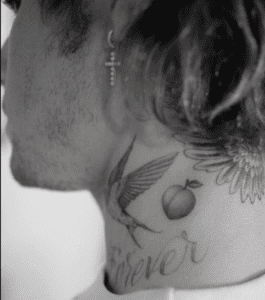 THE WEEKND AND ARIANA GRANDE TEASING A COLLAB?